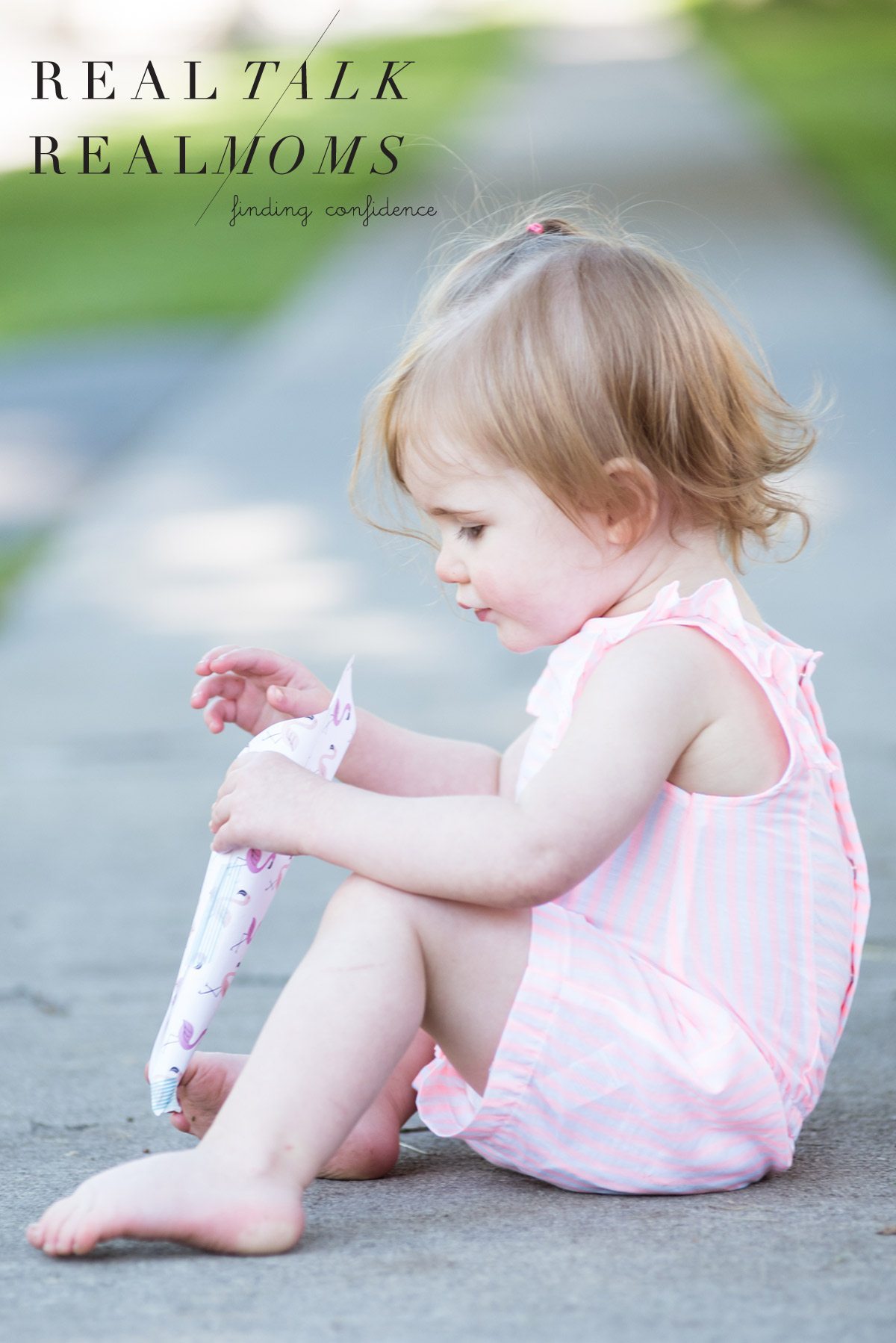 Today my sister is 27 weeks pregnant with her first baby, a little girl who is already loved so very much. I was pregnant myself at this time two years ago (Emerson turned 18 months a couple weeks ago), so naturally we’re talking a lot about babies these days, and the things you need for babies and all the crazy large and small ways that babies change your life. One thing that has come up more than once is Ash saying, “I have no clue what I’m doing!” And that honestly just makes me laugh. Because no one knows what they’re doing when they have a baby, am I right? I sometimes still don’t feel like I know what I’m doing and my baby has quickly morphed into a tiny toddler girl with an abundance of spitfire and sass. So today I’m joining up with my fellow mom friends to dish on finding confidence as a mom. Be sure to pop over and pay them all a visit – I know I’ll be reading along for sure! 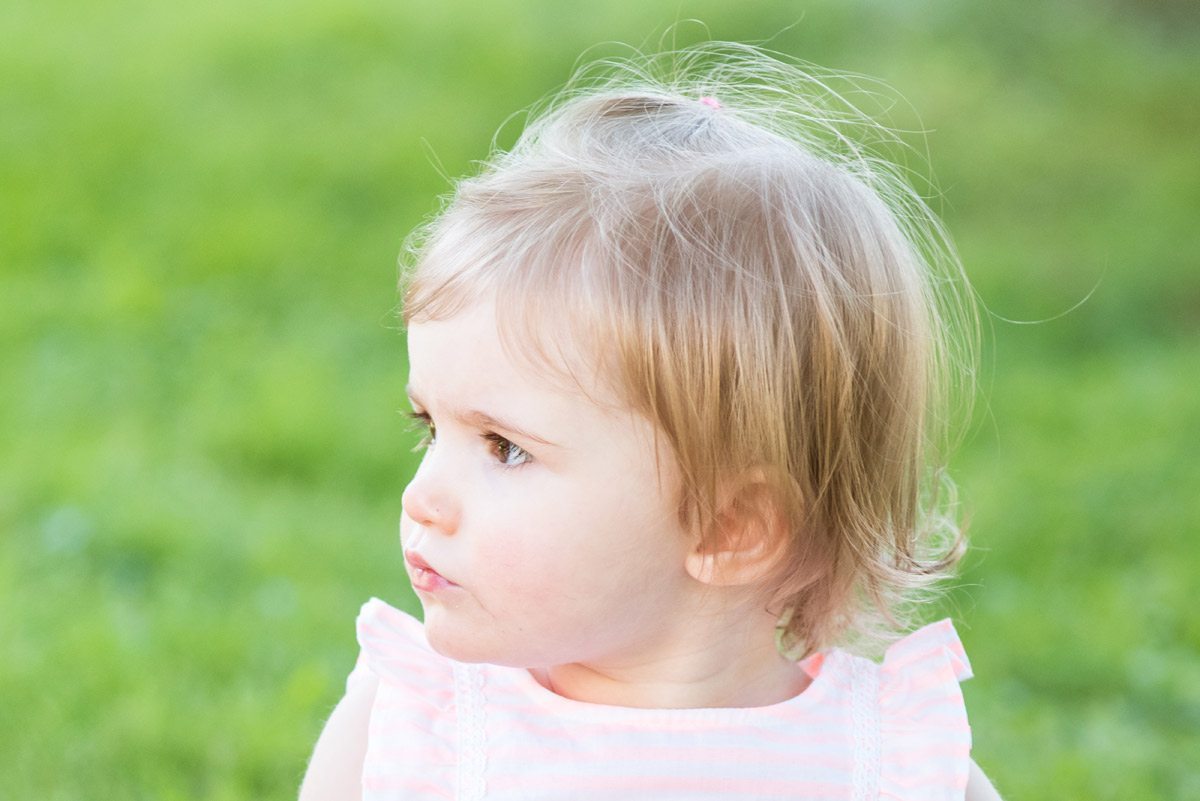 It’s interesting when you grow up knowing that you should be one of four kids, not one of three. There’s this very real, seemingly tangible hole that kind of follows you around. Not necessarily in a dark and foreboding way, but definitely in a way that feels very present, even if quietly so. To this day when I’m asked how many children my parents have I always say something to the effect of, “Four, but it’s just Dave, Ash and I now.” In my head, it’s always four. My brother Christopher died when he was five months old. To hear my mother tell it is a horrifying thing that chills me to the core whenever I hear her speak of the day, but as the story goes, my mother knew he was dead the moment she woke up. At that point he hadn’t yet slept through the night and yet there she was waking up on her own, much later than she should be if the angle of the sun was any indication of the time. She was right. He was dead.

Back in the 80s medical advances were not what they were today, so we still don’t have the full picture of what happened and why, but the cause of death was officially deemed to be septicemia. The cause I guess is somewhat a moot point, because the result is all the same. My parents raised three children instead of four. I have one living brother instead of two. I wasn’t even born yet, but my parents became pregnant with me within six months of his passing, so by all accounts I’m their so-called rainbow baby. I knew of Christopher’s life and death as soon as I was old enough to know of anything I guess. He was always there in the peripheral as the brother I knew but couldn’t see, the son who was loved so dearly but lost. Aunts and older cousins spoke of him often and his presence was never far from our daily life, or so it seemed to my child perception. In so many ways I’m grateful to my parents for this. We talked of him freely, I asked to look at his photos often, and as a little kid when I was sad I would pretend I was talking to him and that he was my guardian angel looking after me. 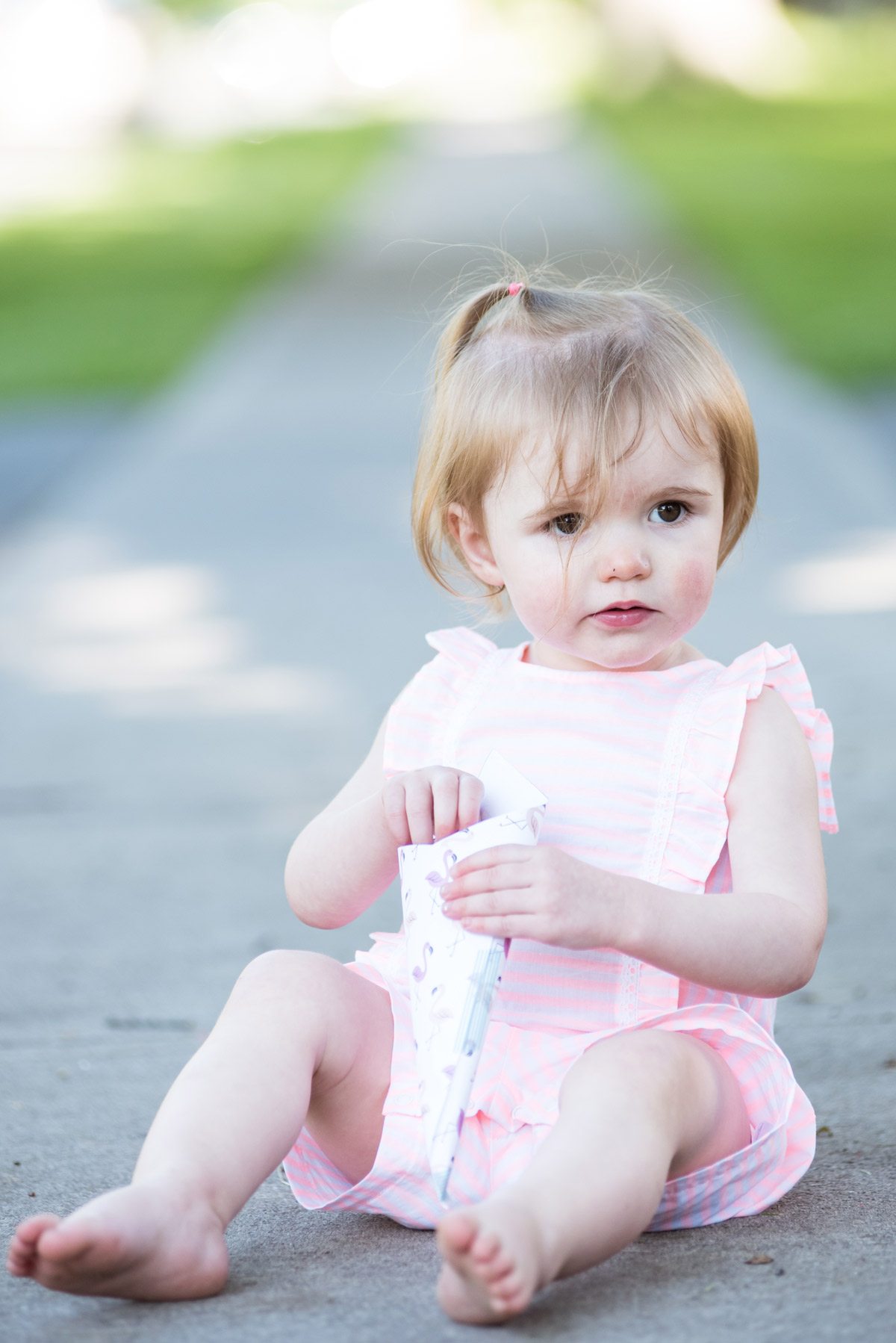 All of this is a very long winded way of explaining that as soon as I found out I was pregnant, there was a part of me that was instantly terrified, because I was sure my baby was going to die on me in the middle of the night. I have always been a light sleeper and even the tiniest bit of ambient light has been a nuisance to me at night. But then one day, someone so boldly let me leave the hospital with a tiny little human under my care and I spent the next six months sleeping with the light on as she dozed next to my side of the bed in her bassinet. I was deathly afraid that if the light was off, something would happen and I wouldn’t be able to save her. If you know me in real life, you know that I am generally a very level-headed, down to earth kind of spirit when it comes to just about anything that might cause anxiety for other people. When it came to this baby though? I was basically a puddle for the first several months, convinced that if I turned away for even a second, she’d be gone.

One night I was rocking Emerson for the third or fourth time, willing her to go to sleep for at least a few hours. She had just turned six months old and in my head that meant she and I had passed some kind of test, that she’d lived longer than Christopher so maybe she wouldn’t die on me after all. The house was quiet save for whatever Pandora station I had playing in the background, and I was suddenly overcome with emotion. Thinking about how completely every cell of my body loved this child, I couldn’t imagine the horror my parents experienced that morning when they walked into the next room and found that little baby boy dead. Even thinking about it now as I write is an emotional thing for me. I can think of no worse thing to experience in life. But they survived it, and so far, I’m surviving motherhood without going completely insane with worry. 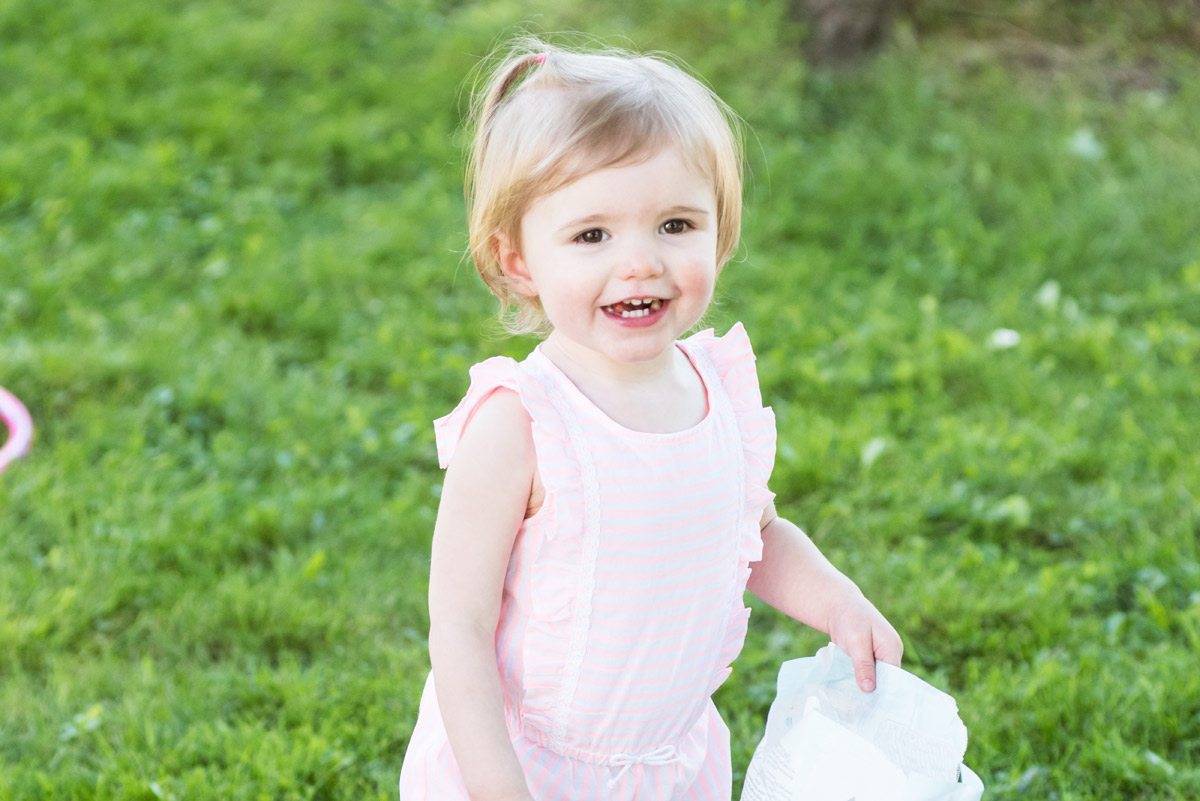 Finding my confidence as a mom when it came to things like formula feeding vs. breast feeding or making the decision to raise my daughter as a vegetarian has been second nature to me. I’m a researcher and a deliberator and an eager question asker of my mom friends, but in the end I kind of assimilate all of that information, filter it through and then follow my gut. I tell my sister the same thing whenever she worries about not knowing what she’s doing. Known of us do. Ask around, do some research, then go with what your gut tells you is best. I like to think of it as good old fashioned mom intuition. For me, that meant I slept with the light on for the longest time . Because, frankly, I knew that was the only way I’d get any sleep at all and I was smart enough to know I needed to be sleeping, too. And now, it means that most nights I only go in and check on her two or three times, but you can bet the baby monitor is on full volume right next to my head all night long. I imagine that will be true for years to come if I’m honest. The traveling I used to love to do? Now it fills with me dread if it means leaving her, but I force myself to do it a few times a year, because I know it’s the best, healthiest thing for me and therefore for her.

Now going on 19 months later, I feel more confident every day in my ability to be a mom and keep my kid alive. (At least most days.) We even live on the wild side from time to time and I gladly let her run around barefoot, because that’s what she loves to do, or eat snacks off the ground after she drops them. For me, being confident as a mom is a series of small decisions every day. Sometimes I worry that we’re not reading enough books right now (because she’s too much of a busy body to sit still very long) or that maybe she’d have more fun in daycare (since she’s at home with me during the day.) That said, when she’s laughing and happy and, most importantly, breathing, I feel like I’ve got a pretty good handle on this whole mom gig.

[Photos by Alice G. Patterson for The Sweetest Occasion.]

Real Talk with Real Moms || Finding Your Confidence - The Effortless Chic - A lifestyle blog bringing easy ideas for every day style to you, every day of the week!

[…] I hit a feels-big-to-me milestone this week as I said hello to the 30 week mark in this pregnancy.  I can remember when I was just barely out of my first trimester and still feeling super sick, I saw a friend post on Instagram about being 30 weeks and immediately wished that I, too, was already 30 weeks.  Now of course it feels like it happened in the blink of an eye.  As I do get closer to d-day for this little one, I’ve found myself thinking a lot about Parker’s first few months.  The first three weeks were actually surprisingly calm. My mom was in town for the first week and a half and Parker and I even survived our first couple of days solo without her or Aaron.  At three weeks, though, we hit a couple of bumps in the road with feeding and I suddenly found myself googling anything and everything related to breastfeeding and pumping.  As a new mom, it felt like seemingly small issues could just consume you and steal the joy out of what is such a fleeting phase anyways.  I had babysat and nannied my way through life for so many years, but now this was my babe and I so desperately wanted to feel like I was doing the absolute best job 100% of the time, which I’ve learned, is a totally unreasonable expectation.  For this round of our Real Talk series we thought we would dive into what it looks like to find your confidence as a new mom.  So from the perspective of trial and error, here’s what I found in my own journey, though this will certainly vary from mama to mama and baby to baby.  I’m actually very much looking forward to the other perspectives on this topic as I get ready to embark on newborn life, part two. (Be sure to check out the other posts from Design for Mankind || A Daily Something || The Fresh Exchange || The Sweetest Occasion ||) […]

Motherhood & Self: How I (Finally) Found My Confidence As A Mother