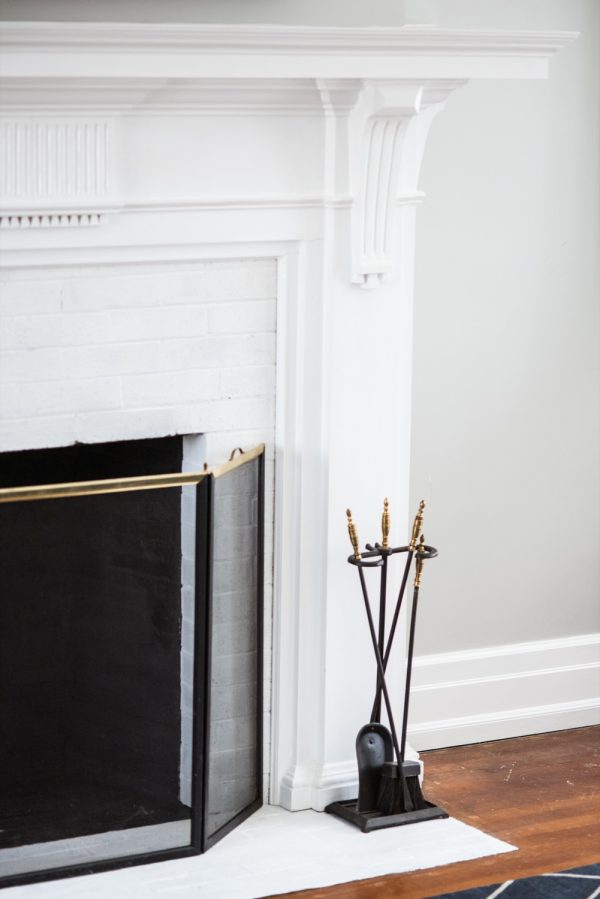 When I shared before and after photos of our living room renovation way back in June, I shared that I was planning to give our fireplace a quick and easy makeover until we decide longterm how we’d like to reface the brick. I’m thinking some kind of small scale marble tile, but I have some time to work that out since we won’t be doing anything like that until we eventually put in a gas insert or something similar. In the meantime, I gave the existing brick a good long time to grow on me and, not surprisingly, it didn’t happen. Wanting to keep things quick, simple and inexpensive, I opted for a paint job to freshen things up! The entire project rang in at under $30 and just took a couple of hours of painting, not including dry time. First up, a quick look back at how this fireplace started out. 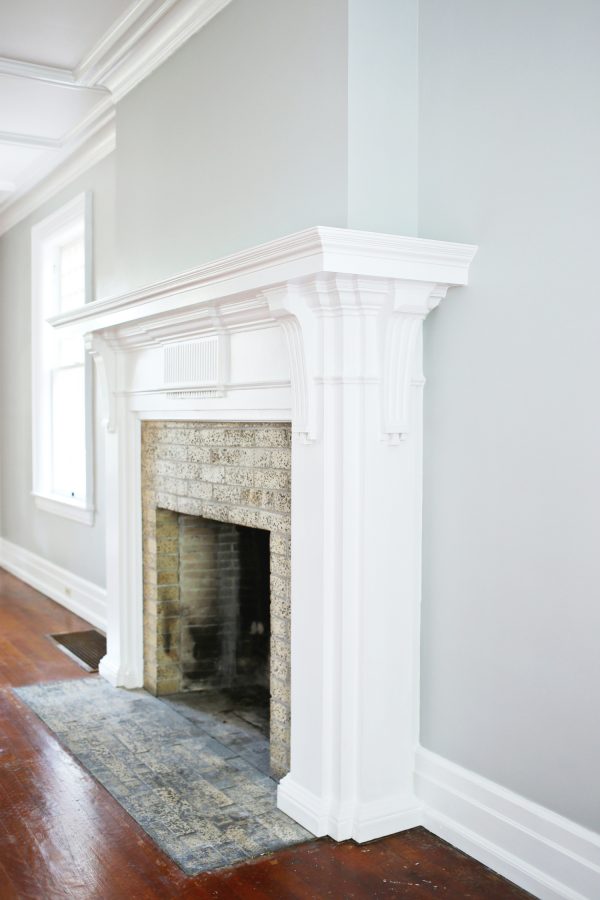 The brick started kind of a yellowy speckled color that I always knew wouldn’t be long for the living once we were moved in and settled. The chimney is actually the same color and outside I kind of love it, but inside it was doing nothing but taking away from that gorgeous mantle. It instantly grabbed your eye when you waked in the room and definitely not in the good way. It was quite distracting actually. So finally after months of sitting and waiting and being sure I was 100% on the painting train, a few weeks ago I got the job done! 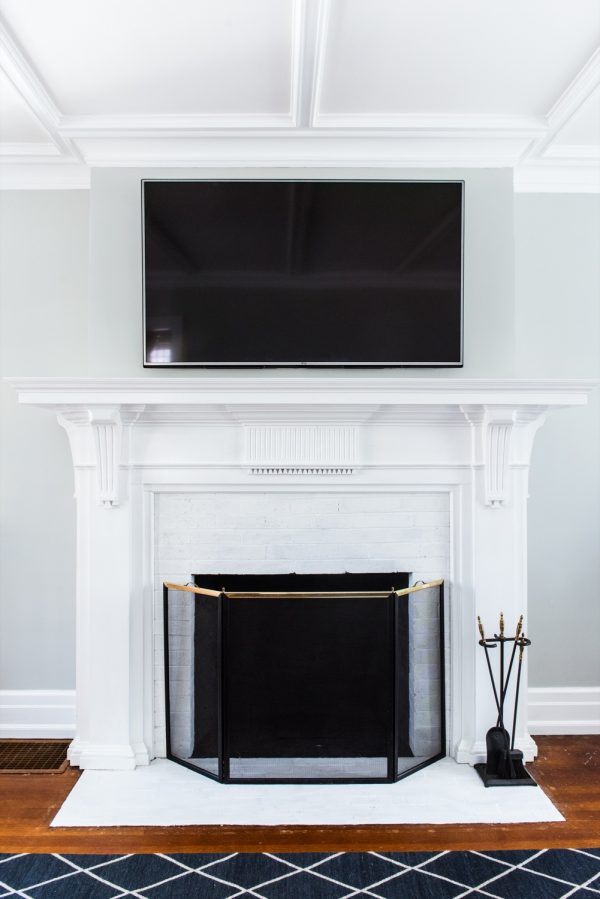 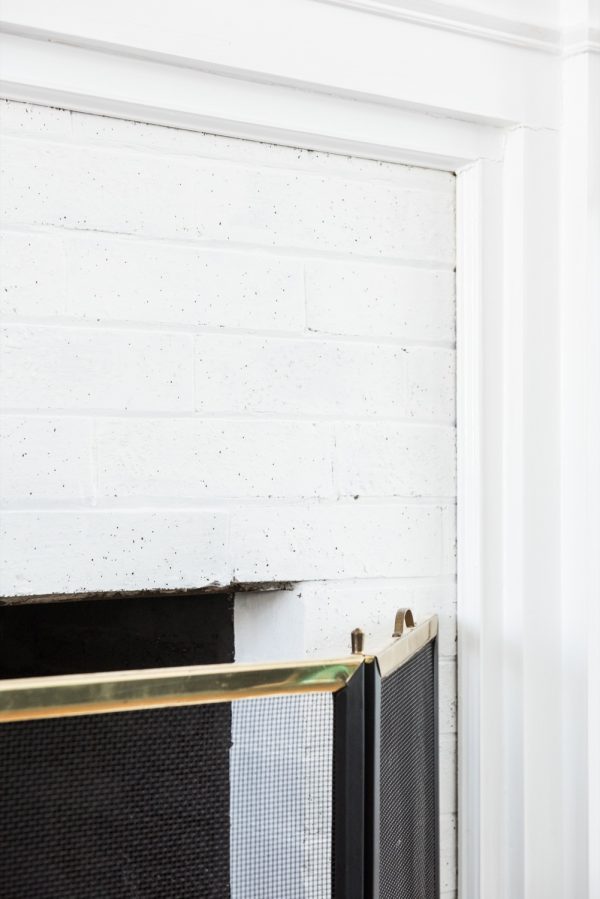 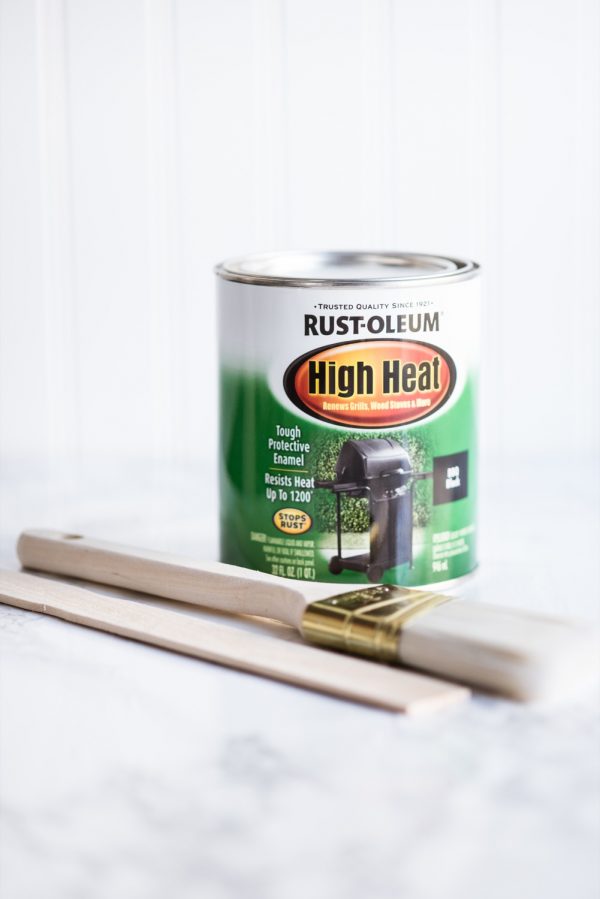 To get started I cleaned the entire fireplace, inside and out, by first vacuuming it and then wiping everything down with a damp cloth. I opted to paint the firebox black to clean up that charred look. Because we are currently not using the fireplace to burn wood and don’t anticipate doing so (a toddler being the primary reason for that among others), a basic black paint would have gotten the job done. That said, who knows if we’ll ever change our mind on that so I went with a high heat paint meant for painting things like grills and wood stoves. This was by far the bulk of the expense with this little project at around $20 a quart. 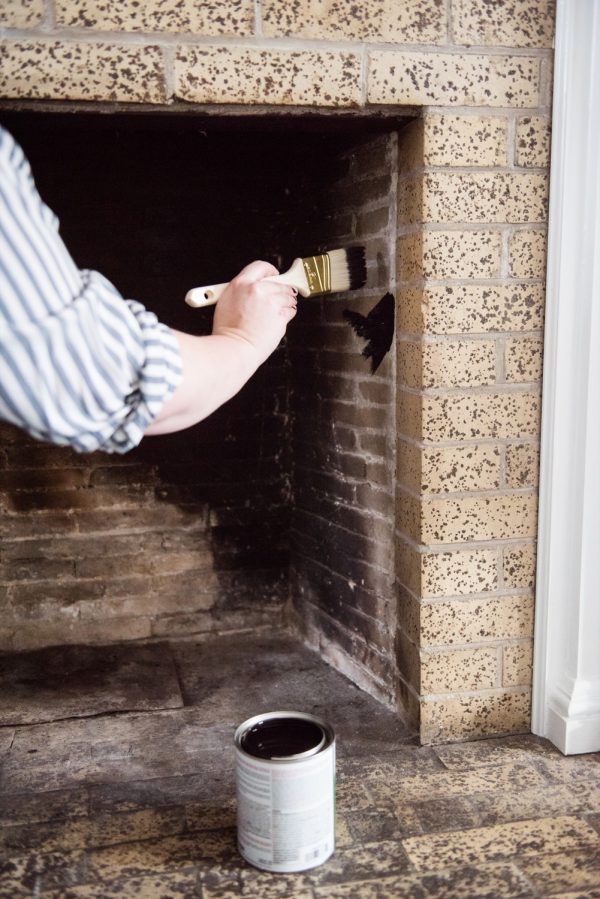 Because this paint is not your basic latex, be prepared for it to stink like crazy. I did this while Emerson was out of the house with a sitter for the afternoon to be sure she wasn’t breathing in the heavy fumes. All of that said, you definitely want to ventilate your room as much as possible and be really careful about drips and spills since clean up would be much more of a chore. I picked up a relatively cheap paint brush so I could just toss it after and not have to worry about cleaning it. Then I went to town painting! One good coat covered everything well and instantly made everything look better. I let it dry overnight and the next day I tackled the exterior brick with just one coat of flat white paint that was already hanging out around the house. (It was actually left over from the painting the ceilings in this room and the dining room.) With one coat, a tiny bit of the variation in the brick comes through, which I personally prefer over a thick, opaque coating slopped on there. I didn’t prime the brick, I just used latex paint and got to work. Easy peasy, inexpensive and it makes a world of difference in the room. 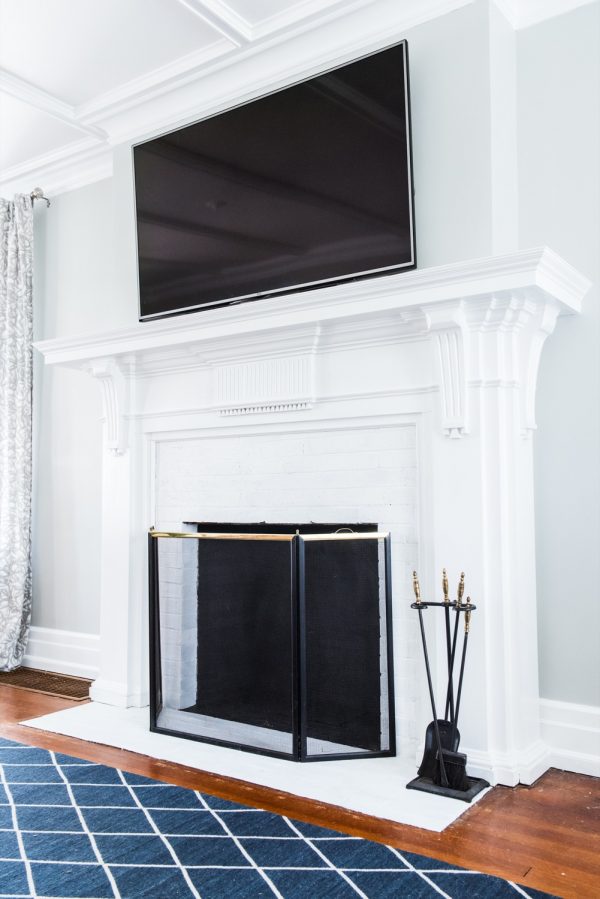 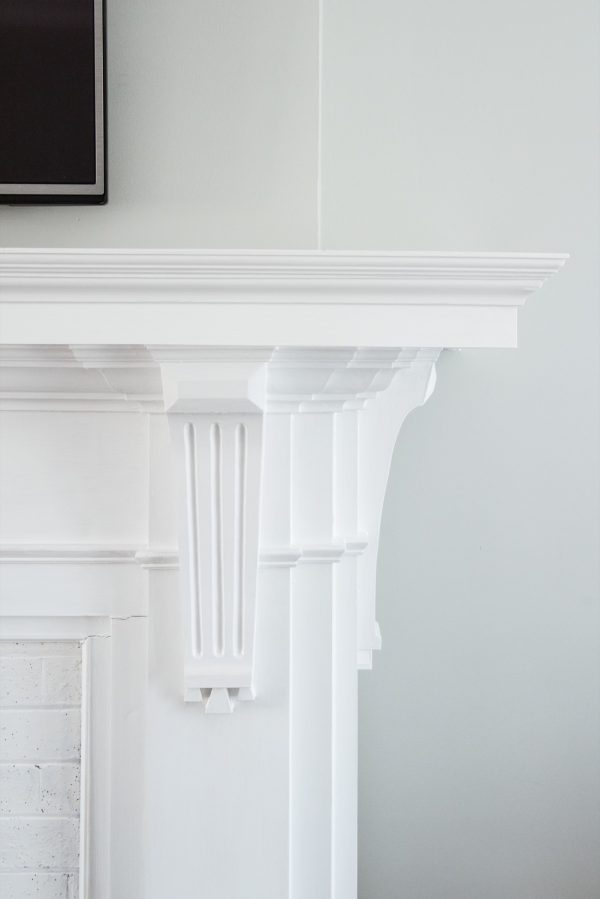 Oh, and let’s talk about the elephant in the room, shall we? And by “elephant” I’m sure you know I mean “the huge black television.” I know there’s a lot of debate at times about televisions mounted over fireplaces blah blah blah, but this is real life and in real life we watch television and have been known to Netflix binge on occasion. I would love if there was a way to magically make the giant television disappear when not in use, but there’s not and there’s also no other place for it to go in this room on account of all the huge windows and the wide doorway into the foyer. Unless we wanted to put the sofa inside the fireplace, there’s really no other good way to set up the room so a huge television over a big old fireplace it is. And with that, let’s take one more look at the before and after on this one, because I’m still pretty excited about how it turned out! Anyone else paint a fireplace recently?

[Before photos by Cyd Converse | All others by Alice G. Patterson.]

WOW it is amazing what paint can do!! This looks SO much better, that yellow was definitely blah but now it's quite beautiful and keeps the focus on the beautiful mantle trim! I love it! Also thank you for living in real life and putting the tv over the mantle! It's way better to have a tv over a fireplace than to have a tv weirdly crammed into a room trying to be unnoticeable that forces everyone to crane their necks around.

Thanks, Marlene! And yes, we're keeping it real. In a house with five kids, a living room without a functional television is as good as not existing. lol

Thanks so much, Shel! I'm really happy with it, too. TV and all also ;-) XOXO