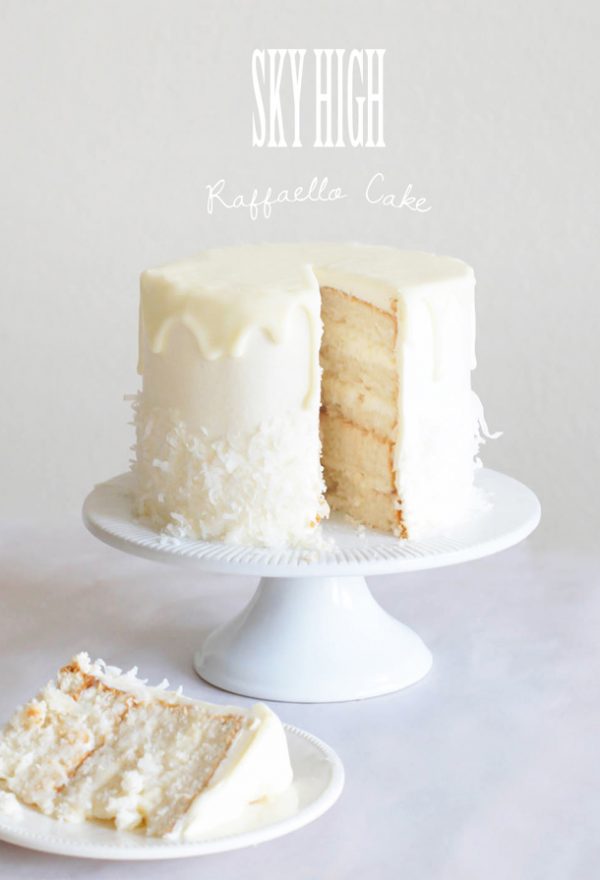 To say I am ecstatic about sharing this recipe would be an understatement. Shared by the incredibly sweet Melina of Sugary & Buttery, it’s a towering layer cake loaded with coconut, almond and white chocolate. Shut the front door. Just, seriously, stop it right now. Can we get together and share a slice over coffee? (Because, you know, if you drink coffee with your cake it instantly makes it an acceptable breakfast. You knew that, right?) While we’re at it, we should take a moment to gush over Melina and her many talents. German born and bred (but a recent Texas transplant), Melina is a baker, recipe genius and food photographer whose blog has shown up on my Pinterest boards more than once. Before getting started, pop over and check out Melina’s tips for how to frost a layer cake and be sure to visit her for a printable version of the cake recipe! 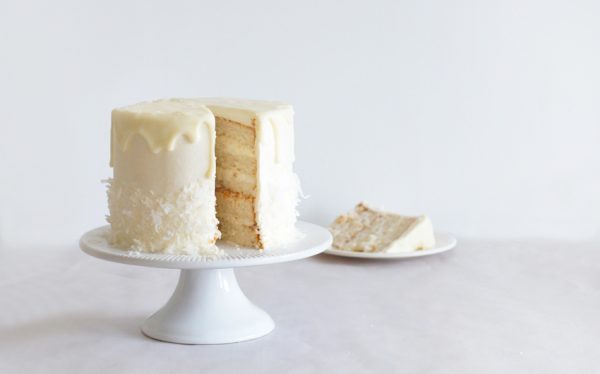 Preheat the oven to 350°F / 180°C and grease two 6-inch cake pans (They should be a minimum of 3 inches high since the cakes will rise quite a bit. Melina recommends a 6 x 3 inch cheesecake pan.)

Put the egg whites in a bowl and whisk slightly. Add the 1/2 cup milk and coconut flavoring and mix thoroughly. Set aside.

In the bowl of a stand mixer fitted with a paddle attachment, combine the flour, almonds, sugar, baking powder and salt. Add the butter and coconut milk and combine on low speed until moistened. Increase speed to medium and beat until light and fluffy, about 2 minutes, scraping down the sides of the bowl as needed. Add the egg white mixture in 3 additions, scraping down the sides of the bowl and mixing just long enough to incorporate between additions.

Divide the batter among the prepared pans and bake for about 60 mins or until a toothpick inserted into the center comes out clean. Allow the cakes to cool in their pans for 10 minutes, then turn them out onto cooling racks to cool completely. 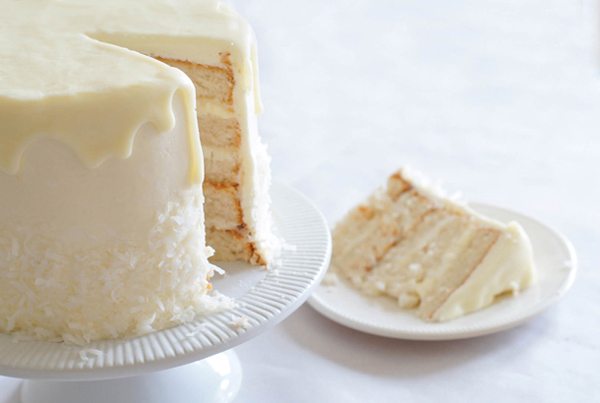 Cream Cheese Filling
Whisk the butter on high speed until fluffy. Add the cream cheese and sugar and keep mixing until well combined, mix in the coconut flakes. Set aside.

The meringue should now be cool to the touch. Cut the butter into cubes and add them one by one with the mixer on medium speed. Add the sifted powdered sugar, then turn the mixer on high speed. The buttercream will start to curdle but don’t worry, just keep mixing and it will all come together. After 2-3 minutes the buttercream should be creamy and fluffy. Set aside.

White Chocolate Ganache
Simply melt the chocolate over a double boiler and stir in the condensed milk. Set aside.

Now it’s time to assemble the cake. Cut both cakes in 3 even layers and put the first layer on your cake stand, fixating it with a dab of buttercream underneath. Spread 1/5 of the coconut cream cheese filling on top and cover with the second layer of cake. Repeat this with the remaining 5 layers.

Once your cake is assembled, you need to crumb coat it before you cover it in frosting. This is necessary to lock in all the little cake crumbs and keep them from working their way to the surface of your frosting. It pretty much just means applying a thin layer of buttercream on the entire cake. Let the cake cool for at east 30 minutes in your fridge.

[Photos by  Melina of Sugary & Buttery.]

For the buttercream; the sugar is 1.5cups =300g not 50g! as you have indicated on the recipe. Thanks for correcting this.

I tried this recipe and the cake didn't rise, was too dense. I printed the recipe from Sugary & Buttery's website only to realize your recipe has 1.5cups (360mls) of unsweetened coconut milk and hers is only 1/2 cup (120mls). Please correct this on your blog coz it's misleading.

Hi! Cant wait to try this. How would I convert for 2x9" round pans?

Hi! I baked this wonderful cake last night! While it tasted delicious, I think I may have under baked it bc it was pretty dense. It shouldn't be that way, right? lol I baked it in 2- 8x3 pans for about 45 minutes. The toothpick came out clean and it had just started pulling from the sides but it was very moist and heavy. We ate every drop of it, lol but I want to make it for others so I know need to do better. lol Any tips? (I used professionally ground almond flour btw) thank you!! It was amazing!!

Hi, Tera! I've asked Melina if she could pop in and leave a comment to help you out. I'm sure she'll be chiming in soon! In the meantime I'm so glad you enjoyed the recipe. Her cakes are amazing! xoxo

Thanks Melina for the assistance. I don't know what I did incorrectly. My butter was room temperature and I did beat it for 10-15 minutes. Then it all separated and will not come back together. I froze the cake until I can figure out what to do. Now I have a pound of butter syrupy mess and not sure what to use that in or on?

Also my cake texture is not white and fluffy like the picture. Probably due to not grinding the almonds fine enough.