Well, guys. We survived! Three days and more than four feet of snow later, the first official blizzard of 2014 is in the books. I’ve spent much of today doing the post-blizzard clean up. Shoveling the walk and stairs, trying to unbury my car. All the good stuff. If you’ve never been through a real all-out blizzard, I have a few survival tips for you today. First up, have a sense of humor. Your plans are going to be derailed, you’re going to literally be snowed in at your house and after a couple of days the cabin fever will start to hit. So make sure you have really really good boots if you do have to go outside, but otherwise you should probably just be lazy, watch a lot of movies and play board games. That’s pro tips right there. 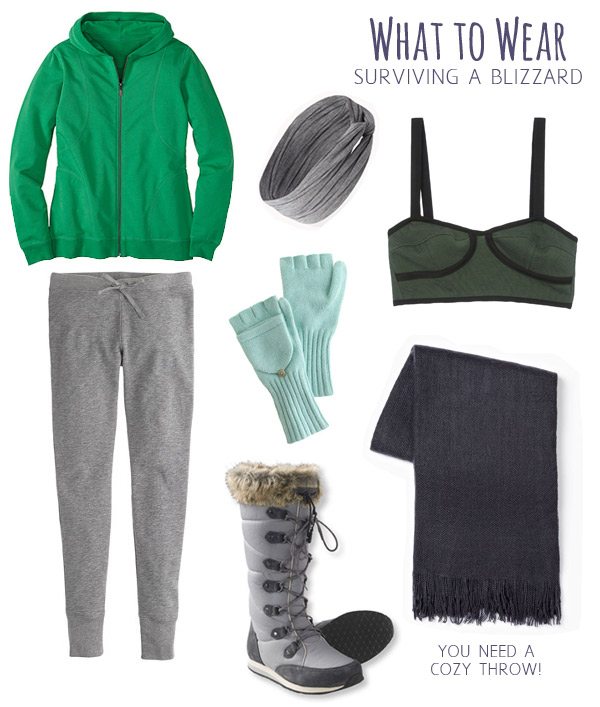 I have been bunkered down by myself and B has been in a hotel the last two nights because he wasn’t able to make it home after leaving for work on Tuesday morning. We’re talking the highways and interstates were completely shut down and stranded motorists were shacking up in fire halls all over the area. So what did I do? Why I threw on my coziest comfy pants, an oversized hoodie and kept my throw blanket close by at all times. And I shoveled. A lot. Today the sun came out and it was a gorgeous blue sky kind of day and the weekend is supposed to warm up considerably. Which is kind of a joke because between the icestorm right before Christmas and this week’s blizzard, it appears winter is having the last laugh this year. Oh well. I have plenty of yoga and pajama pants to see me through!