Tomorrow is Election Day. While I don’t usually talk about politics,
today I think it’s important to make an exception to that rule. 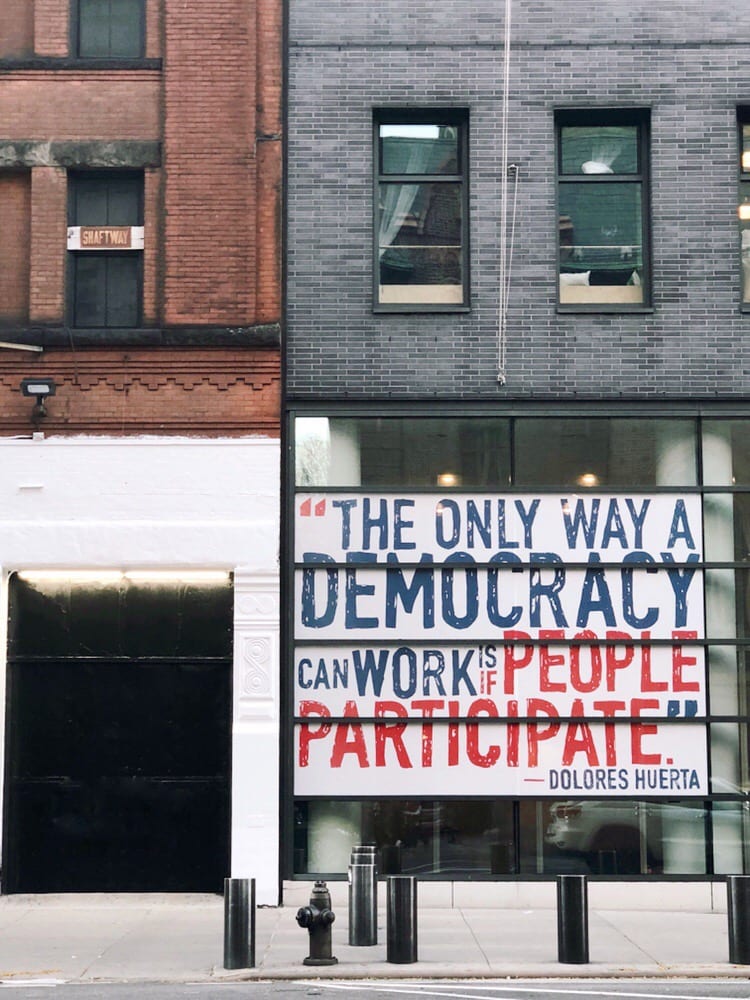 [Photo by Michelle Kinney at the JCC at 77th and Amsterdam in New York.]

I was a freshman in college on September 11th, 2001. At just 18 years old, it was an event that served to act as a great chasm in my life. Before. And after. Months later when President George Bush made the decision to invade Iraq in the ultimately fruitless search for weapons of mass destruction, I remember sitting around my dorm room listening to my then boyfriend and one of our good friends condemn the decision.

I was young, pretty impressionable and could imagine no scenario in which our government wouldn’t make the best, most prudent decisions with whatever intel they had available on the behalf of the American people. I truly believed our leaders were and should be privy to information we didn’t have and that they had to be doing the right thing. I fought back against my friends, hard, over why if the President deemed it so, it had to be the right decision. It never dawned on me that my moral compass did not necessarily reflect the values and intentions of others around me, not even our highest officials and leaders.

Fast forward however many months and years, and the tolls of that war became self evident. What did not manifest, of course, were any weapons of mass destruction. While I had not been old enough to vote for George Bush at the time he was elected, I would have voted for him if I had been of age. I was raised in a pretty conservative area by a very conservative father who was, and still is, the center of my universe and my greatest hero. I registered to vote, as a Republican, on the day I turned eighteen years old. I absorbed what I heard between the walls of my house and I took it as fact. The problem was that pesky little war and those nonexistent weapons of mass destruction. It turns out, as soon as one and one didn’t add up to two, I was out.

In my early 20s I began to question everything. I re-registered to vote, dropping my party affiliation, and instead of voting the way it was expected of me I started making my own decisions. To the extent that I was able, I began researching issues, politicians and their platforms, and reading up on proposed policy. I stopped watching the news and started listening to a lot of NPR. I stopped voting based on someone’s party affiliation, and started voting based on my best measure of someone’s character and integrity and how that aligned with my own values. To this day, I am still a registered voter with no party affiliation. I am intentionally neither Republican nor Democrat, very deliberately.

Along the way I’ve been called a lot of names by people even in my own family who don’t understand my way of thinking. A bleeding heart, a liberal, a f*cking Democrat. Countless times I’ve heard that I went away to college and grad school and was brainwashed by liberal professors to think like they do. The only problem is, I stopped caring about what people thought about my political persuasions because I cared too much about people.

All of this is to say, I vote. And I believe you should, too. The bane of democracy is that it only works if we participate, and I’m so tired and disheartened by abysmal voter turn out election after election, especially in non-Presidential election years. This year’s midterm election matters. It matters for so many huge reasons that affect us all. While I would love if everyone would vote like I vote, I honestly believe it’s most important, first and foremost, that we’re all getting out there to the polls. It’s important for us give a shit, to recognize that our vote matters and to heed the responsibility we have to make the best, most educated decisions we can about who we think truly has the potential to lead us down a path of good.

So. Here’s why I vote. I vote because as an 18 year old girl I foolishly believed our government is always just and good. I was proven wrong.

I vote because as a woman and a rape survivor, I don’t believe anyone should have a say in my reproductive health.

I vote because some of my very very very closest humans are gay and I believe in their right to marriage, employment equality and adoption.

I vote because my two blue-eyed teenage stepsons are asking questions about male privilege and white privilege and what it means to live in a rape culture. Someday I’d like to be able to give them different answers.

I vote because my high school best friend is raising two black sons in Virginia and she has to teach them different things than I have to teach my two white sons in upstate New York.

I vote because this weekend five people were shot at a nightclub in our little city and the shooter was only charged with assault.

I vote because someone I love has leukemia and I can’t imagine how much more catastrophic it would be if her employer didn’t provide her with amazing healthcare. No one should ever have to make a decision between life and death based on the availability of health insurance.

I vote because I believe in the preservation of our National Parks. I vote because I’m a vegetarian in large part because I know it’s the quickest and easiest way to dramatically reduce one’s carbon footprint.

I vote because I don’t believe innocent children should be stripped from their parents and locked like animals in cages.

I vote because I believe in your right to take a knee during the National Anthem, because I honor and defend our Constitutional rights to peaceful protest.

I vote because I believe religion and Christianity have no place in our government, but also because I fervently believe you should be able to live freely in your spirituality wherever and however it finds you.

I vote because I believe in humanity over capitalism, even though I’m a business owner who is grateful that capitalism has afforded me and my family many great privileges.

I vote because I would sooner give up everything material I’m lucky enough to possess than to see one of my friends or family suffer.

I vote because I am a mother.

I vote because I hope someday my daughter doesn’t have to worry about being assaulted as she walks across a dark parking lot at night.

I vote because I hope someday my daughter doesn’t have to worry about being retaliated against for getting better grades than her male classmates at a male-dominated engineering school.

I vote because it matters.

I vote because it is my right.

I vote because it is my duty.

I vote because I can’t leave it up to any elected official to take care of me and mine.

I vote because I am going to hold those elected officials accountable.

I vote because I support our service men and women and because I demand that our veterans receive the support services they so desperately need and deserve.

I vote because I care about you and your family and your children, and I hope our kids are all lucky enough to grow up in a world where they can love and thrive without fear.

I vote because love is love.

I vote because our justice system should be color blind.

I vote because some days I don’t know how to fight back, but I know hitting the polls is one way to make my voice heard.

I vote for you.

I vote for me.

Why do you vote?

I, too, came for design and decor and found so much more. Thank you!

I am sitting here reading this and literally clapping and crying. Bravo! I found your page on pintrest and was only interested in your color scheme to my surprise I found much much more❤️

Awww Merri, thank you so so very much! This means more than I can express. I appreciate meeting another kindred spirit! xoxoxo

Exactly! I think you're setting a great example for your followers as someone we admire taking this initial step... if people can't handle it, then they are probably in need of a look in the mirror. (It only made me love your blog more!)

Regardless of people's beliefs, apathy is no longer an option - there are too many resources, and too many things happening in the world, to live in a bubble.

All of this! Now is the worst possible time to roll over. If it makes you uncomfortable, figure out why and figure out how to fix it, but don't shut down to the people who are trying to speak honestly and earnestly about these things that affect all of us!

YESSSS. Thank you for sharing this post and your personal connection to voting and all it entails! Our relationships to politics and voting is not an easy conversation to have with loved ones (or yourself), but it's so important.

Thanks, CK! I appreciate your support so much. I lost a bunch of Instagram followers yesterday, because I'm guessing some people don't care for my opinion lol Which I get on some levels, it can be overwhelming and inundating, but I would love if we could all have more real, honest, thoughtful conversations about issues, so I figured, why not start with me?

Yes to all of this. Thank you.

No, thank you, San! I appreciate your support! I am excited we both have the ability to get out and vote tomorrow. xoxo