These strawberry cheesecake pudding shots are a delicious boozy dessert perfect for parties and special occasions. They’re easy to make and always a crowd favorite!

The first time I had pudding shots at a friend’s party I knew I was going to be making them. A lot.

It turns out they’re really simple to make! And you can customize them in so many ways. This recipe for strawberry cheesecake pudding shots is one of my favorites. 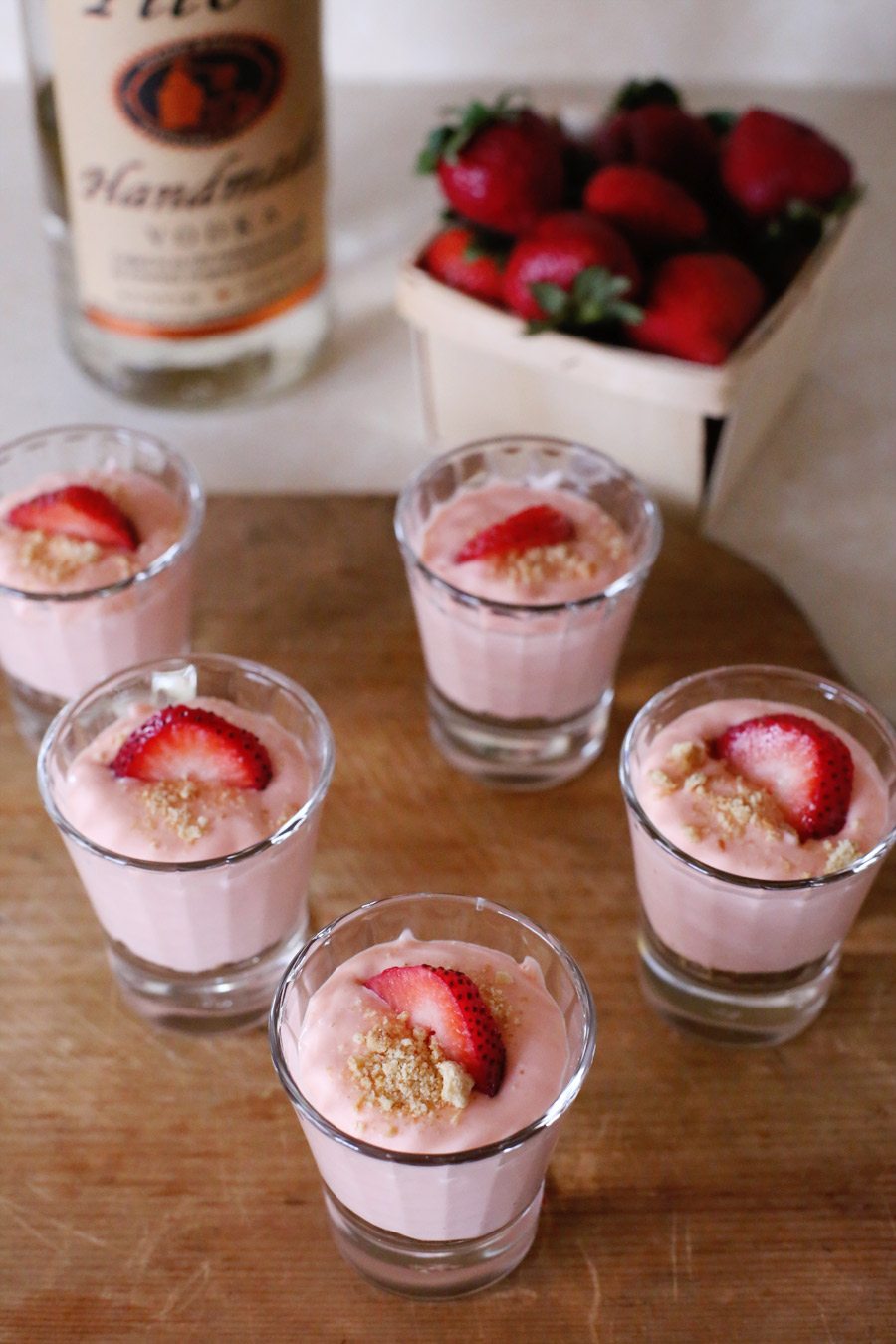 What are pudding shots?

I like to think of pudding shots as the slightly more sophisticated cousin of the Jell-O shot. Made with instant pudding and various toppings, they’re like a tiny little dessert…with booze.

These cheesecake pudding shots feature a sprinkle of graham cracker crumbs at the bottom and fresh fruit to mimic a teensy little cheesecake. 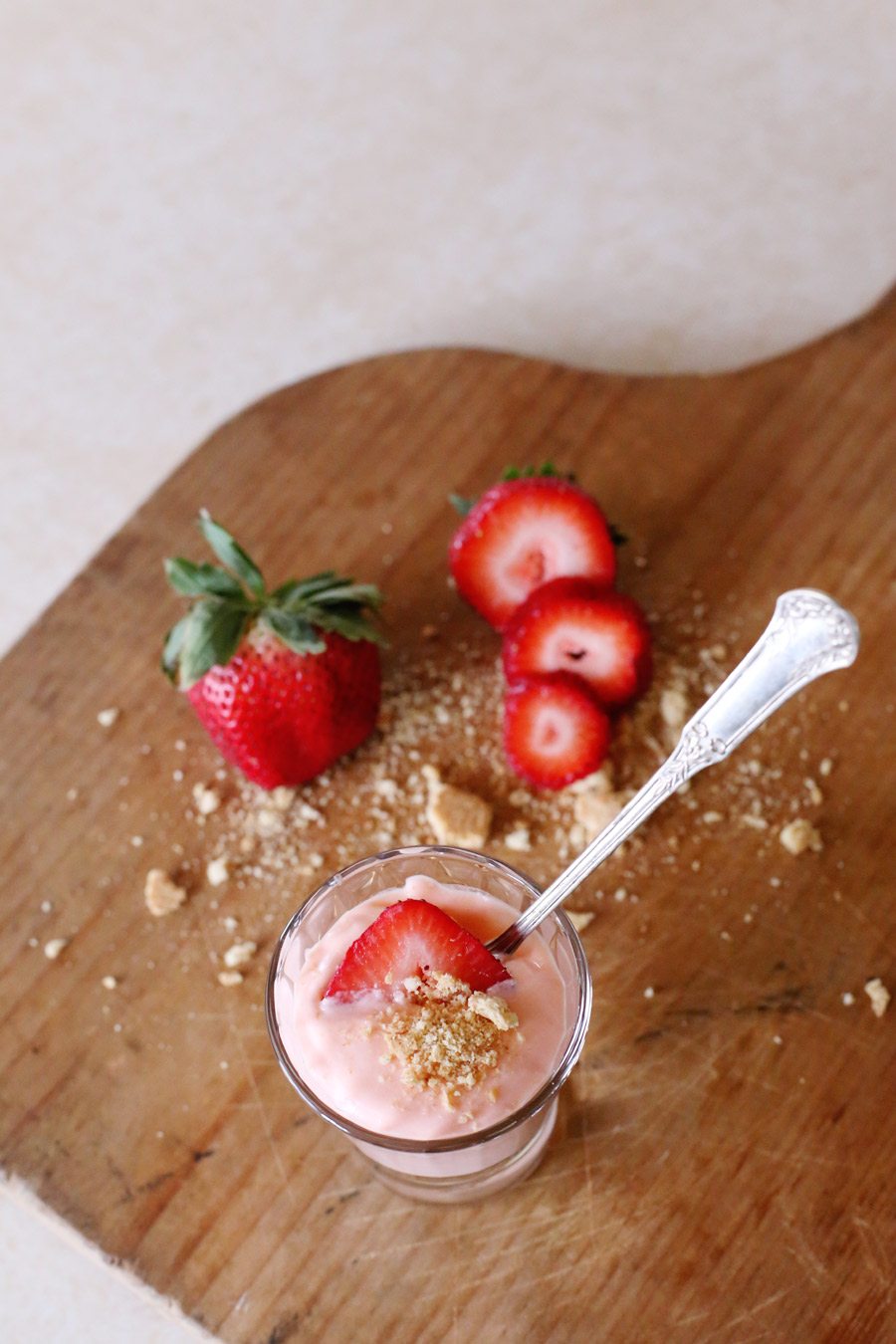 It’s strawberry season! It’s officially summer! All good reasons to make these immediately. Have you ever had pudding shots? They’re kind of like dessert and a mini cocktail all in one. Also known as utter perfection. Even if I do say so myself. 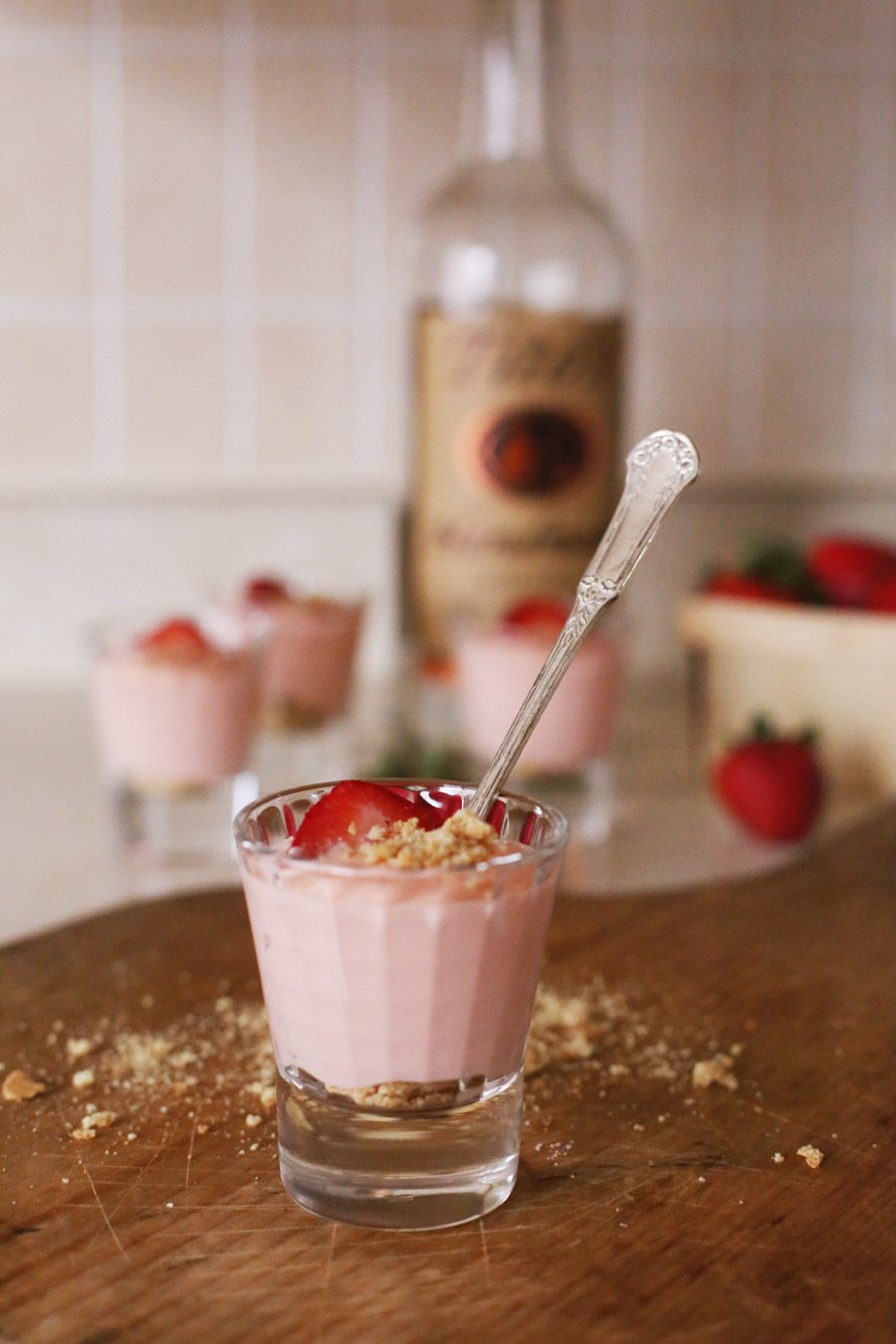 How to Make Cheesecake Pudding Shots

Scroll down for the printable cheesecake pudding shot recipe. 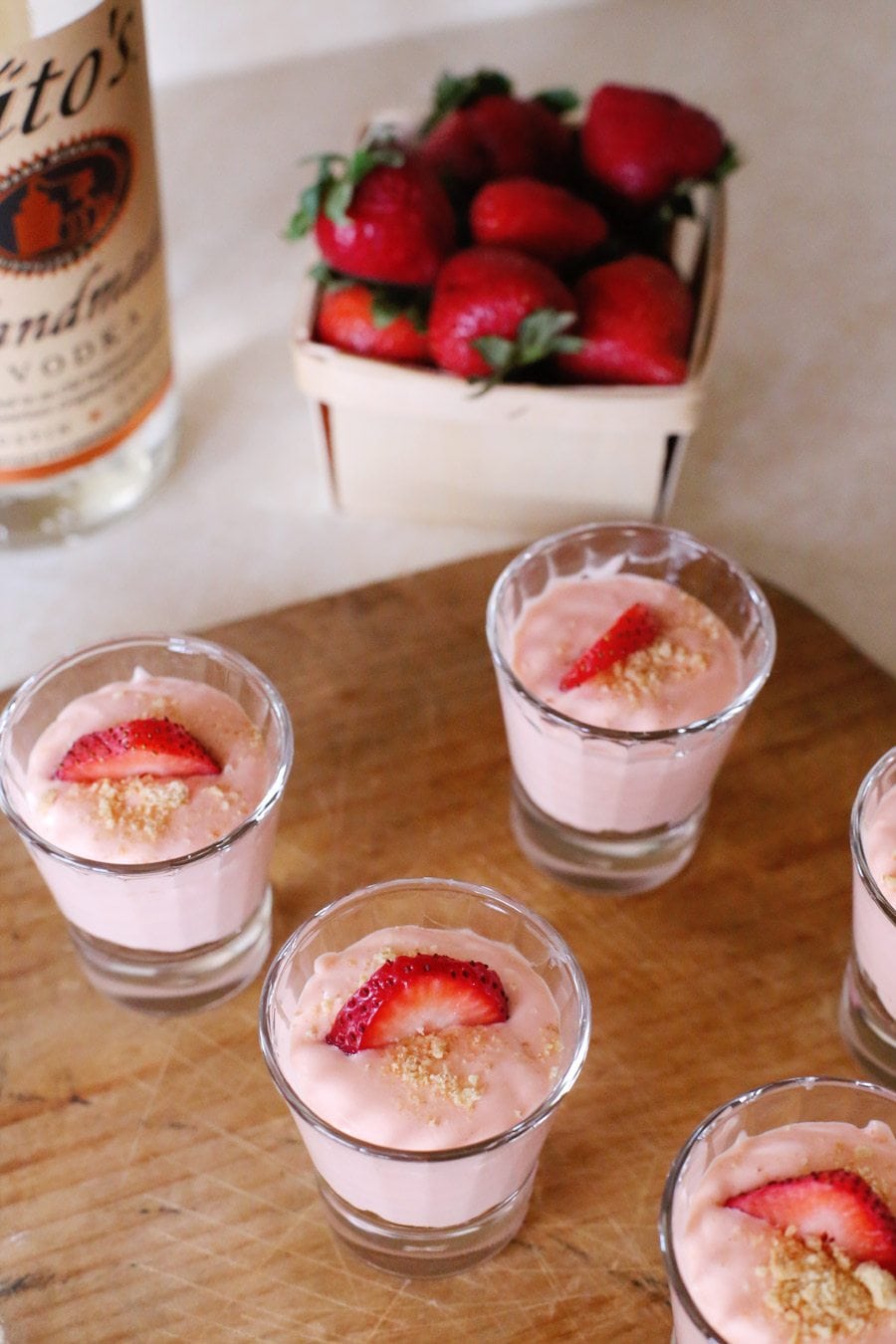 What ingredients do you need for pudding shots?

The basis of any good pudding shot recipes is three key ingredients. Luckily, they’re easy to find at any and super inexpensive.

To make your pudding shots, I suggest using a set of *pretty shot glasses or even little *mason jar shot glasses with lids. 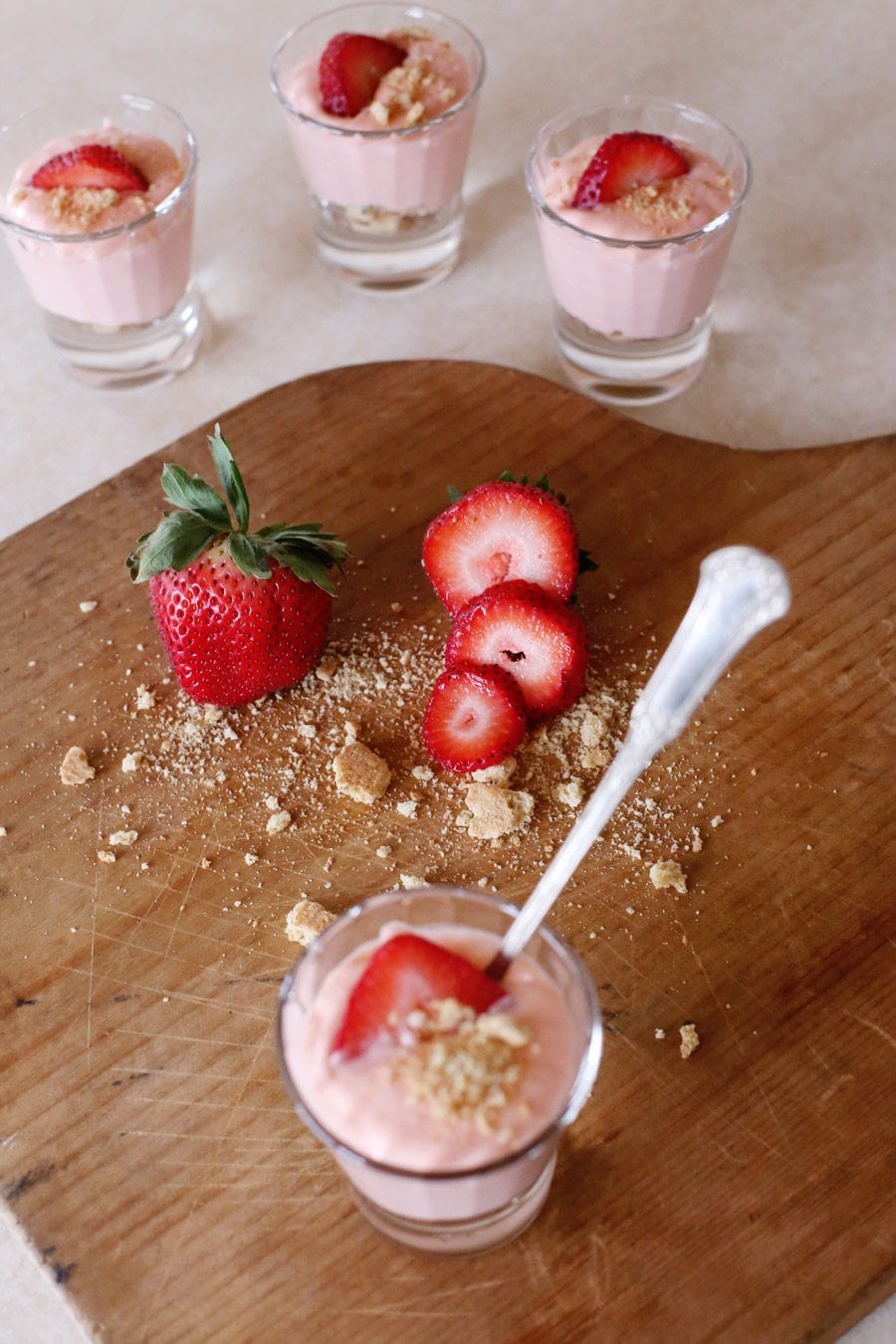 Pudding shots are such a novelty at parties and they’re really easy to make. They aren’t as boozy as their Jell-O shot counterparts and they’re far yummier if you ask me.

With these strawberry cheesecake pudding shots, the fresh strawberries are the perfect finishing touch!

Can you freeze pudding shots?

Yup! I get asked this question a lot. If you make too many or just want to stock up the freezer, these freeze really well.

You can make spoon the pudding shot mixture into little *plastic cups with the lids and enjoy them whenever you feel like having something a little sweet.

They transport really well that way, too, if you’re bringing them to a party to share. You’ll be the talk of the town! 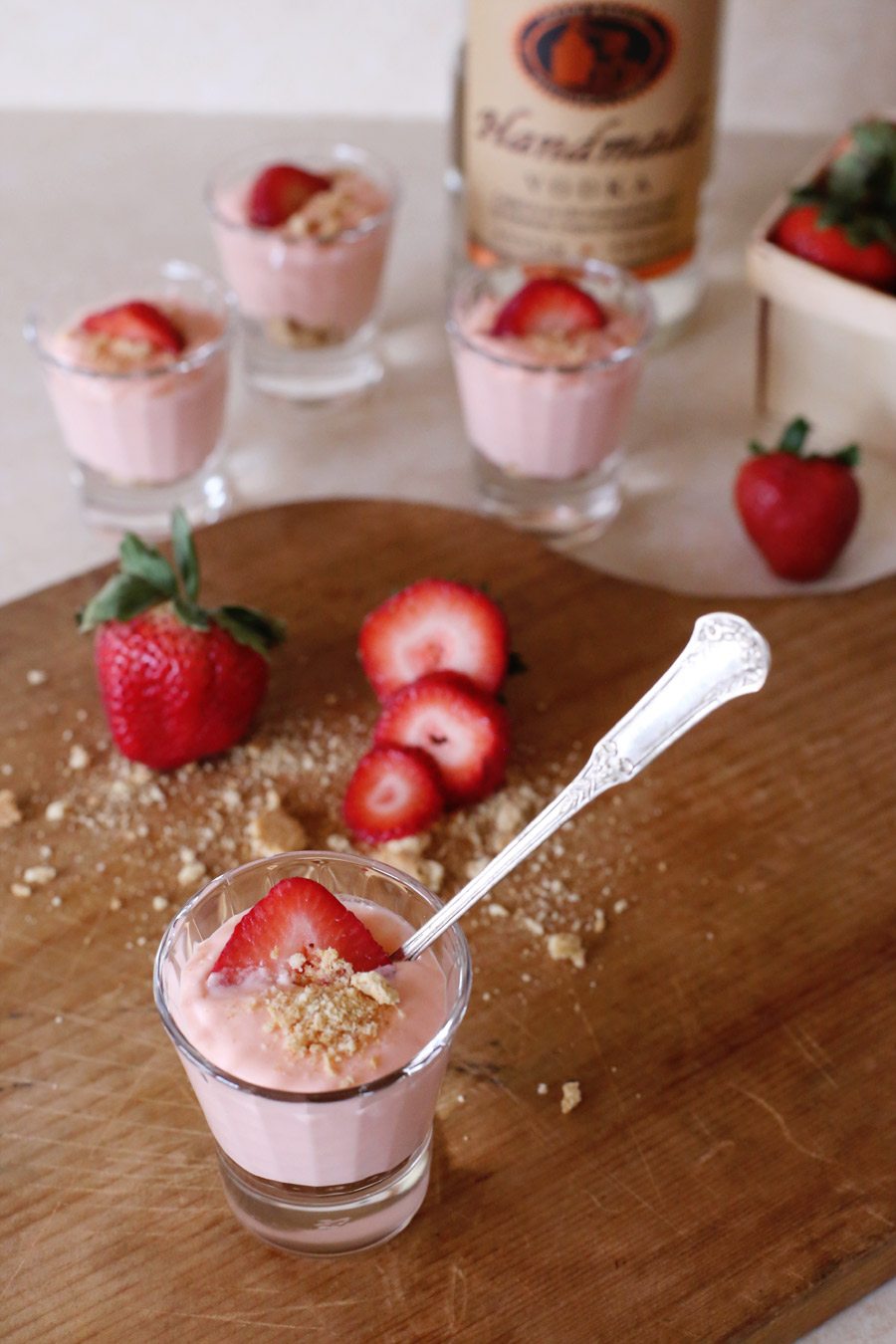 For a fun grown-up take on the campfire classic, I always suggest my s’mores pudding shots. The tiny toasted marshmallow on top is key.

In the fall I’m a big fan of butterscotch spice pudding shots. They have a warm spiced flavor perfect for the cooler months.

[Recipe + photos by Cyd Converse for The Sweetest Occasion.]

Just made these. They look great and taste good but not thickening up very much. Did I do something wrong?

These pudding shots are so fun to make and serve! Everyone loved them!

Okay, just to clarify....NO milk at all? Also, do you use the 4 serving or 6 serving size of pudding? Some flavors come in both sizes.

Hi Edward! The recipe calls for 1 cup of milk. I used the standard, smaller pudding package. With Jell-O brand that is a 3.4oz size. Thanks, I hope this helps!

So I am confused, do I use the milk, or not? Does the vodka and sauce substitute for the milk? Thanks so much

Hi Jaimie! I'm sorry for the confusion. You do NOT use the milk. I hope this helps!

Making these but I decided to do whipped cream flavored vodka.