I wanted to do something a little different today and share 50 random things about me that you might not already know. I was motivated to do so primarily by the fact that I love reading these kinds of posts when other bloggers share them. There’s no rhyme or reason behind what things I’m sharing, I’m literally just writing off the cuff and sharing whatever comes to mind as I type. Maybe you’ll learn some weird little thing about me that we have in common or maybe you’ll find this completely boring. Whatever the case may be, feel free to comment and let me know! I want to mix things up this year with a post here and there like this one that is intended to be a fun, informal way of sharing more about me and connecting with you, so your feedback is always welcome! 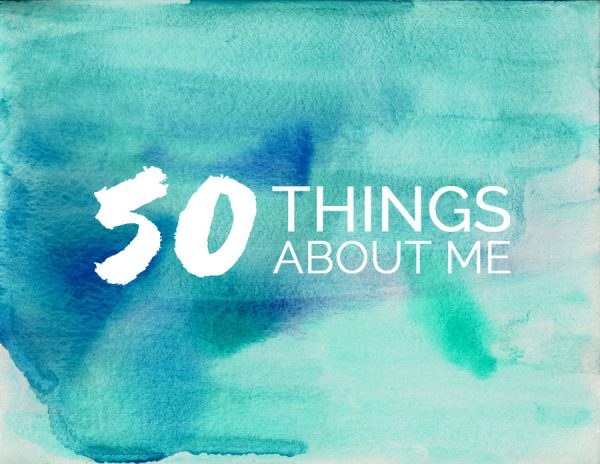 1. I have three degrees. An AAS and BS (both in architecture) and a Master of Business Administration with a concentration in marketing and management.

2. I haven’t eaten a single bite of red meat since I was 22. I stopped eating meat and poultry altogether when I was 25. I do very rarely eat fish or shellfish but otherwise eat a vegetarian diet about 99% percent of the time.

3. My favorite color is teal, with cobalt blue being a very close second. In general I am drawn more to cool colors and really don’t care for yellow or red much at all.

4. From the time I was a little kid I knew I wanted to be an interior designer. Oddly it didn’t quite work out that way, but I think it’s kind of fun that I ended up in a career that allows me to explore and practice my three biggest passions every day – design, photography and writing.

5. I recently watched the entirety of Gilmore Girls when it hit Netflix. I never watched it when it was originally airing, because it was while I was in school and I never watched much tv at all in those days.

6. That said, I’ve watched every episode of Grey’s Anatomy since it first started airing over 10 years ago, and while I’m missing Christina like crazy this season I’m still a fangirl for life.

8. I have a younger sister who is 26 and an older brother who is 35. Most of the time I’m pretty sure I don’t suffer from middle child syndrome.

9. I sang in a show choir in high school. We wore some awesomely bad costumes. Also, watching Glee always makes me super nostalgic about those days.

10. I come from a very entrepreneurial family. My parents have owned their business for 34 years. Most of my other uncles and cousins own their own businesses, too.

11. Also, my parents are divorced and, yes, they still own a business together. That’s a weird thing for most other people when they hear it, but it has been that way since I was 13 so to me it’s completely normal.

13. My favorite place I’ve traveled to outside of the United States is Prague. Just a gorgeous, fascinating city.

14. My favorite place I’ve traveled to domestically is Montana. I’m pretty sure I left a piece of my heart there.

16. My first car was a 1989 Ford Tempo with likely more rust than paint and two doors that didn’t lock. I drove it gleefully until it blew up on me a year later.

17. We are crazy about board games and cards in this house. My mom taught the boys how to play rummy (my grandmother taught me when I was a kid) and we now play for hours on end on the weekends.

18. Speaking of, B’s kiddos are a huge part of my life, but I am very intentional about not over-sharing about them on the internet, because Google remembers everything and it’s important to me to protect their privacy.

19. I became obsessed with taking photos as a kid and in high school I took every photography class offered. I almost switched majors to photography last minute and sometimes I kind of wish that I had. Over the last few years I’ve been working on really improving my photos, because during my college years I largely didn’t shoot at all.

20. Talking about photography, I upgraded to the Canon EOS 6D about a year and a half ago and it’s an amazing camera. Most of the photos you see here are shot with the Canon EF 50mm f/1.4 lens, which is a great lens for the price.

21. Currently we live in a little town in the Thousand Islands region of Upstate New York, which is just north of my hometown. We’ve been back here for nearly two years now, but prior to that I did stints in both Syracuse and Rochester.

22. In 2007 I cut off 12″ inches of hair and wore a bob for the next few years. It’s currently the longest it has been since I was a kid and I have no immediate plans to cut it again.

23. I used to drink my coffee black, lightly sweet. Then B introduced me to cream and it was over. Now I drink it with cream, barely sweet.

25. Between B and I we have fourteen nieces and nephews, ranging in age from three to seventeen. I suspect that number will continue to grow in the coming years, because my sister does not yet have kids, but hopes to someday. Good thing I love being an aunt!

26. I never used to be able to eat eggs with runny yolk. After years of practice (yes, it involved practicing for me) I’ve finally acquired the taste and can’t get enough of poached eggs in particular.

27. I’ve never broken a bone, but I’ve had stitches more times than I could count.

29. I’m not ashamed to say that most years I start listening to Christmas music in September or October. I’m absolutely that girl.

30. I took seven or eight years of French, and really wish I were fluent. We’re only a half a day drive to Quebec though so when we travel to Montreal or Quebec City I do my best to practice and would love to take classes again.

31. On a daily basis I don’t drink soda and we don’t keep it in the house, but sometimes I just crave a Diet Pepsi and I can’t even function until I have one.

33. A good book, an emotional movie or tv show, or a sappy commercial (ugh, I’m looking at you, Sarah McLachlan) will make me cry every single time. I’m a complete and total sap.

34. I love animals in general, but I’m just over the top in love with dogs. Every home needs at least one dog in my opinion. (At one point we had three. Three might be too many!)

35. As of right now as I’m typing this, I still need to finish packing away our Christmas decorations. I think I’m in denial that the holidays are really over. Boo!

36. Randomly, I have huge feet. As in, I wear a size 10. It makes no sense because I’m not at all tall and my mother and sister both have average to small feet. It used to bother me that my feet are big, but I’m learning to be less self conscious about it as time goes on.

37. I love laughing more than just about anything else in life. I like to surround myself with people who make me laugh and who get my sense of humor, because a day without laughter is a waste of a day.

38. That said, I’m not just some clown. I take life pretty seriously, I just try to remember not to take it too seriously and to not sweat the small stuff. The big stuff I probably sweat more than I’d like.

39. We moved into our current house (which we’re renting) about ten months ago and I still have a ton of painting I want to accomplish. I anticipated it being done approximately eight months ago. I was wrong.

40. We are hoping we’ll live right here for a few years until we build or buy a house. I’m sick of moving. Twelve moves in seven years will do that to a girl.

41. I hate doing laundry. I don’t know why, because it’s not a difficult task, there’s just something about doing laundry that feels like no fun to me. Specifically the folding and putting it away part.

42. I recently learned of the term procaffeinating and it somehow put my life entirely into perspective.

43. I’m currently working on a complete overhaul and redesign of The Sweetest Occasion. This will be the fifth redesign since 2008. You can see all the past versions of the site design here!

44. I wear yoga pants far more often than is socially acceptable. Maybe I should work on that this year? I love wearing “real” outfits, I just don’t seem to take the time to make the effort most days during the week because I work alone, so…yoga pants.

45. I almost never wear nail polish except for when I know my hands are going to be photographed. No matter how hard I try, a fresh manicure lasts about three hours on my hands and shellac isn’t much better so I stopped bothering.

46. I text in full sentences and rarely use common text vernacular. I spell out the words and typically can’t bring myself to use any abbreviations other than the ubiquitous “lol” and occasional “lmao” when there’s just no other way to get the point across.

47. I hate socks. I would rather be barefoot than wear shoes any day of the week. Flip flops are a close second to being bare foot. That said, I also hate having cold feet, so basically I make no sense.

48. I try to wash my hair no more than two to three times a week, so the result is that I use a lot of dry shampoo and wear my hair in a top knot pretty frequently during the week. On the weekends I wash, blow out and straighten my hair as my go-to look.

49. Occasionally I try to imagine what it would be like to have a “normal” job working for someone else again, and it’s actually unfathomable to me at this point. In May I’ll have officially been self-employed full time for four years.

50. I love to read and try to make time for it every day. This year I want to be better about that and would like to average a book every week to two weeks.